Nikolas Plytas travelled to the stunning island of Milos for his latest breathtaking project as the Greek watersports star weaved his way around the turquoise coast and lunar-like landscape on a Prada Luna Rossa Team board and his bare feet.

– The 26-year-old from Athens started out in 2006 and, aged 19, he conquered the famous shipwreck at Elefsina where he performed tricks over the rusty hull, then last year combined snowboarding and waterskiing for his thrilling multi-terrain H2O project. 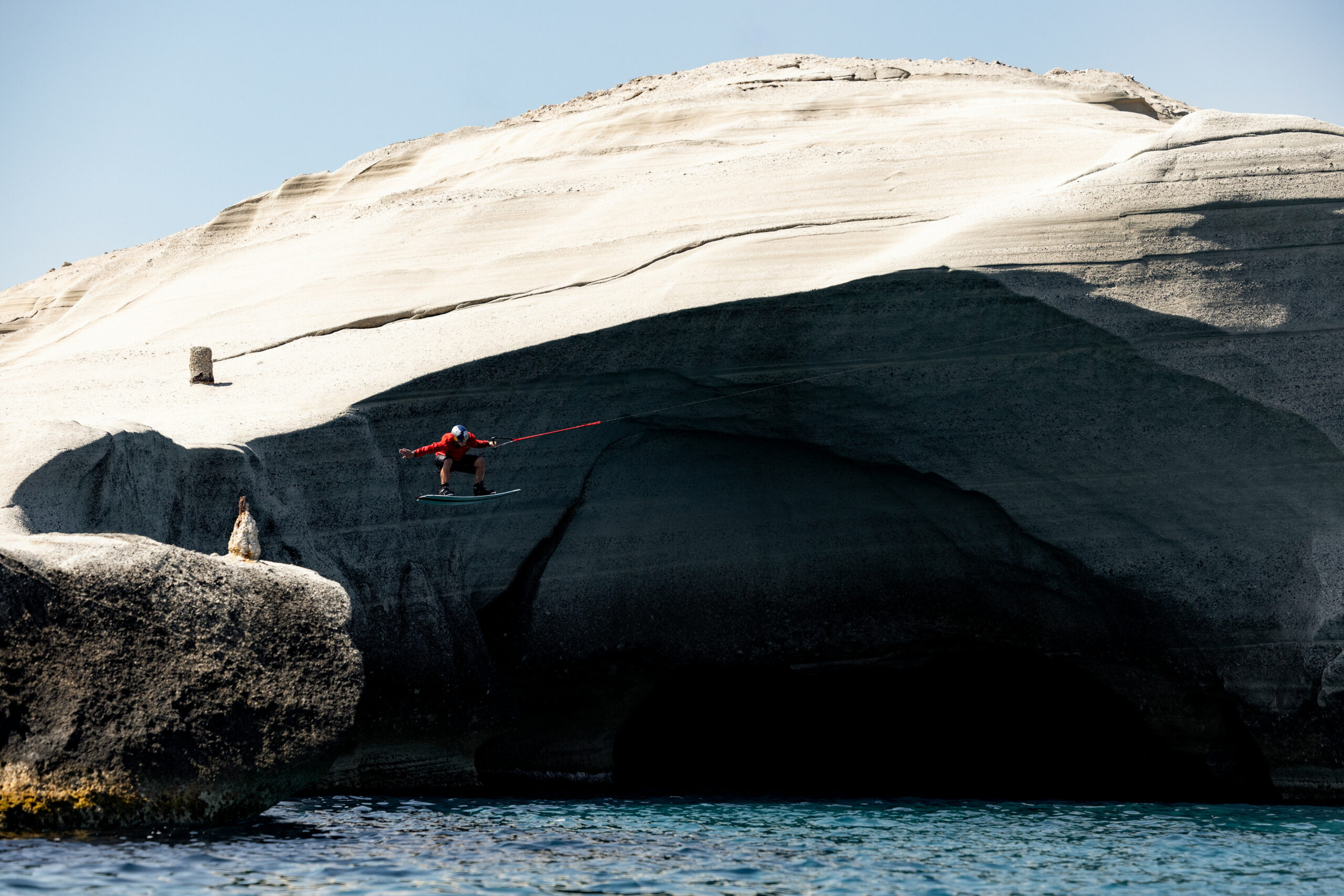 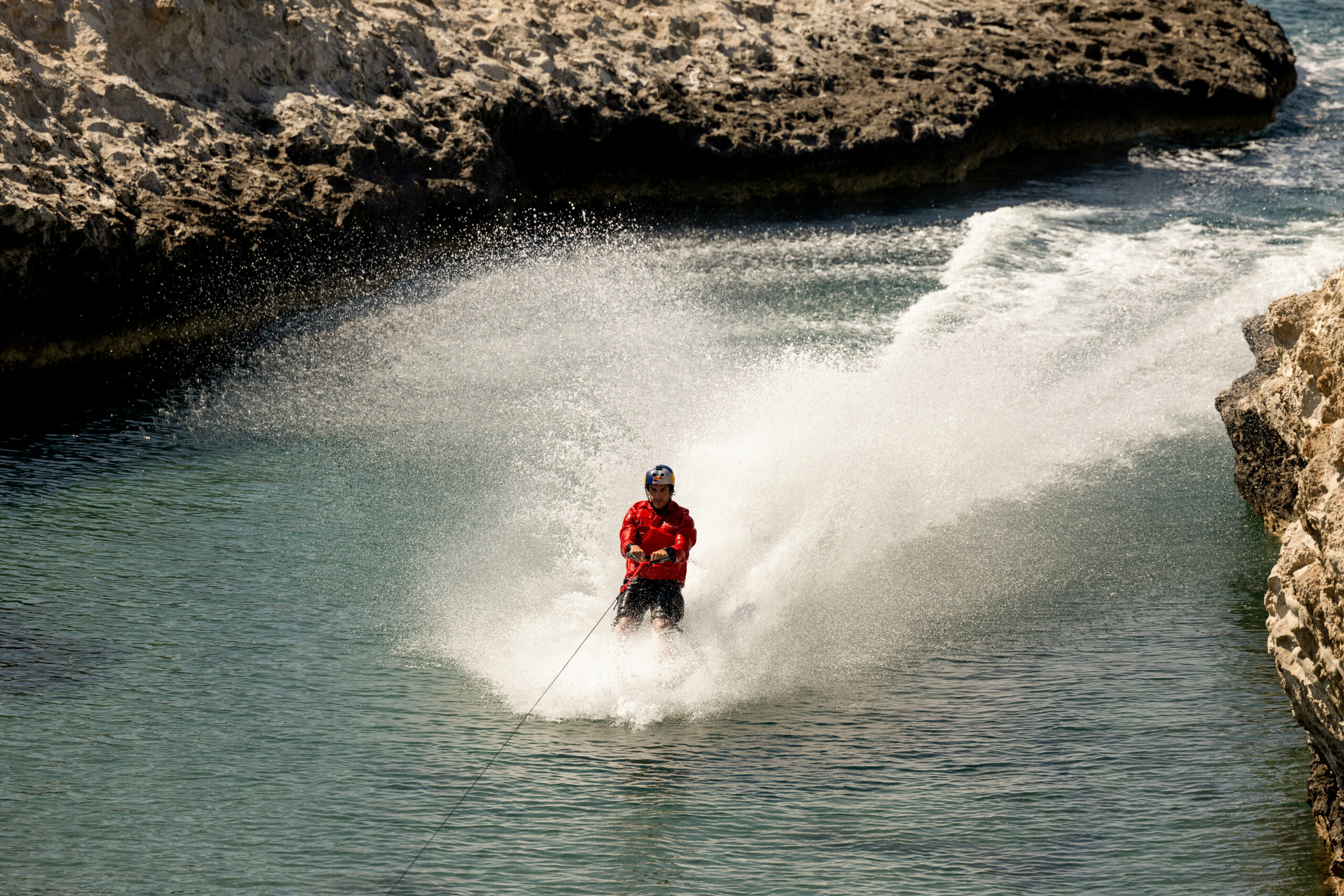 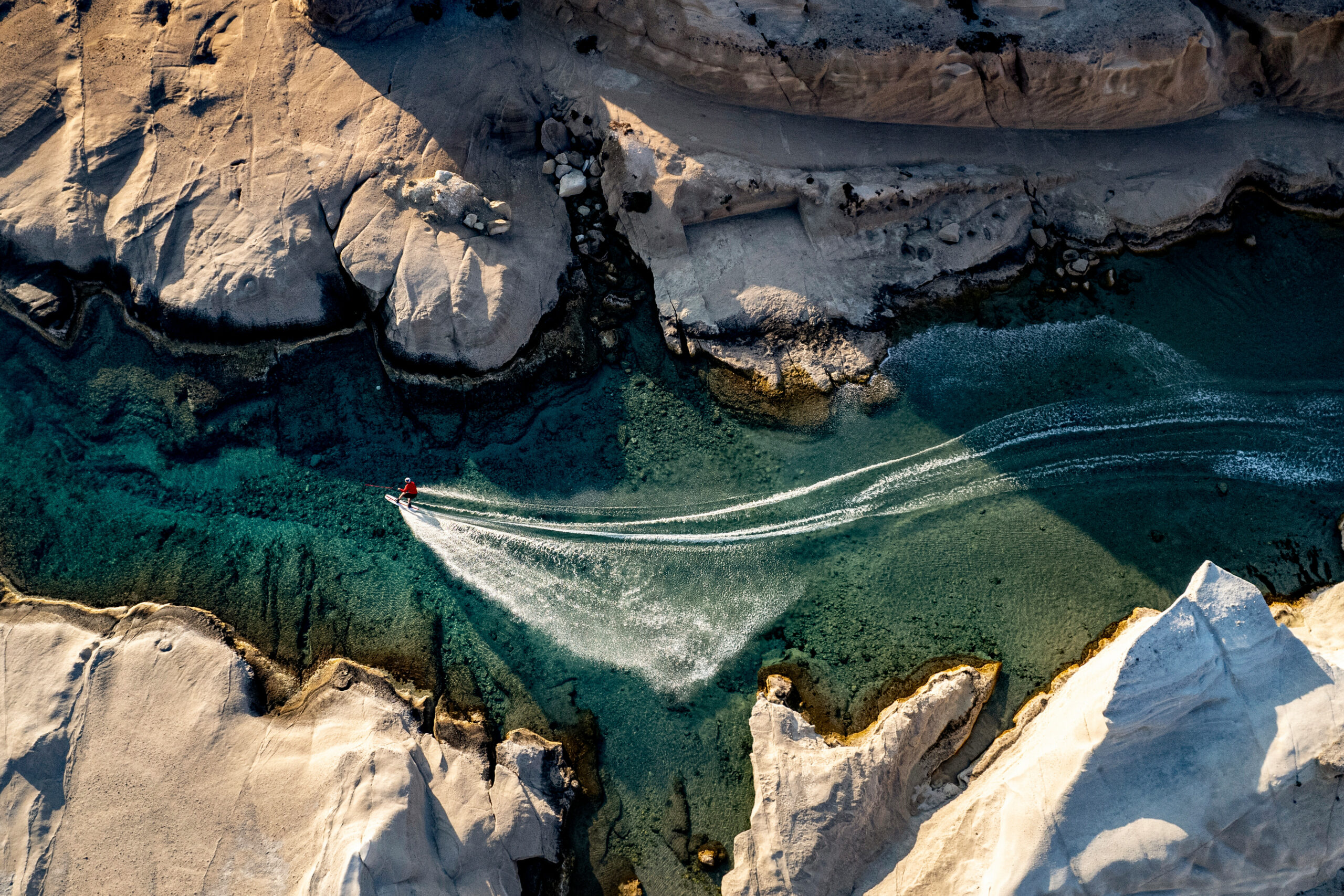 – This time around, Plytas decided to set the bar even higher, pushing past his limits on the magical lunar landscapes of Milos, Sarakiniko and Kleftiko, where he managed to become one with the sea.

– Looking at all the pictures he had taken of the two beautiful beaches in Milos, his mind began to wander, creating images of an entire line that would combine the water, rocks and sand terrains.

– He revealed with a smile: „When I came back from Milos, I stayed up all night creating my line“.

– The enchanting lunar landscape, with its chalk-white rocks, azure-blue waters, and narrow caves, instantly became the ideal location for Plytas to tell his story in a challenging shoot.

– It was important for Plytas to have the best equipment possible with the Prada Luna Rossa Team helping design a board that was fast, with sharp edges, and directional (designed to ride best in one direction) for great stability at high speeds, while he was also kitted out in stylish and technical Prada Linea Rossa clothing. 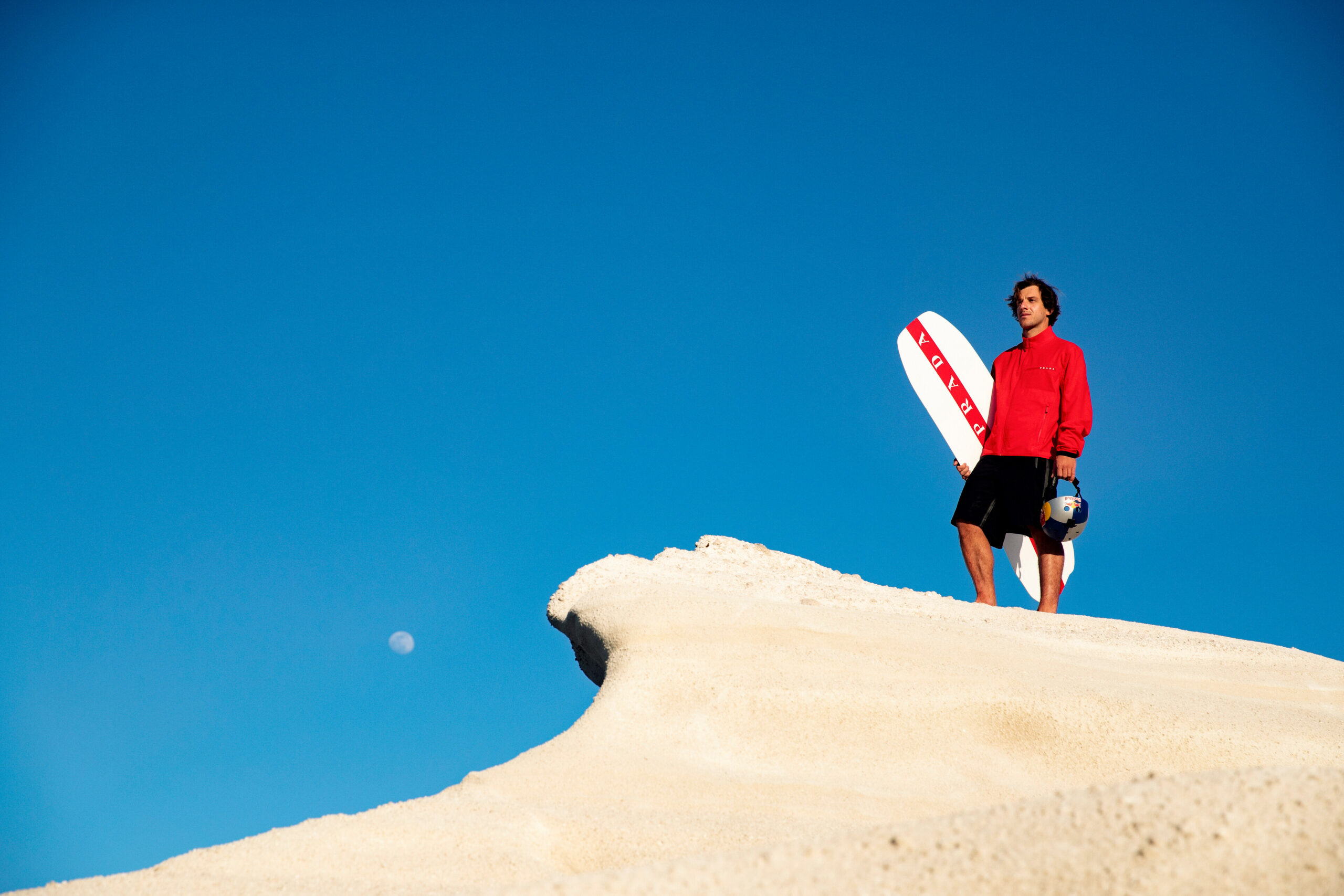 – “The Luna Rossa team came up with a shape and from the first time I saw it, I liked it. The board is more narrow than a wakeboard and with sharper edges. It’s really stiff in order to have full control,” Plytas explains, noting that his inspirations for the design included a variety of sports including directional snowboarding, surfing and trick waterskiing.

– The training hours were endless, but the dedication to his vision remained strong as he starts by jumping off a cliff, landing on the sea and getting into the right position to ride through a cave.

– ‚The project also required intense physical conditioning, he explains: “There are a lot of impacts, I so had to train really well to meet the creative challenge I’d given myself.“ He continued “It was scary because I was going probably around 50kph just about three meters away from the beach.”

– Trust proved crucial with the people tasked with towing him through the very narrow caves, while we also see him jumping off a cliff, taking off his board in the air and landing barefoot on the sea in an incredible sequence of control.

– He added: “I made everything I had originally planned to do when I designed that line and I’m extremely happy.” 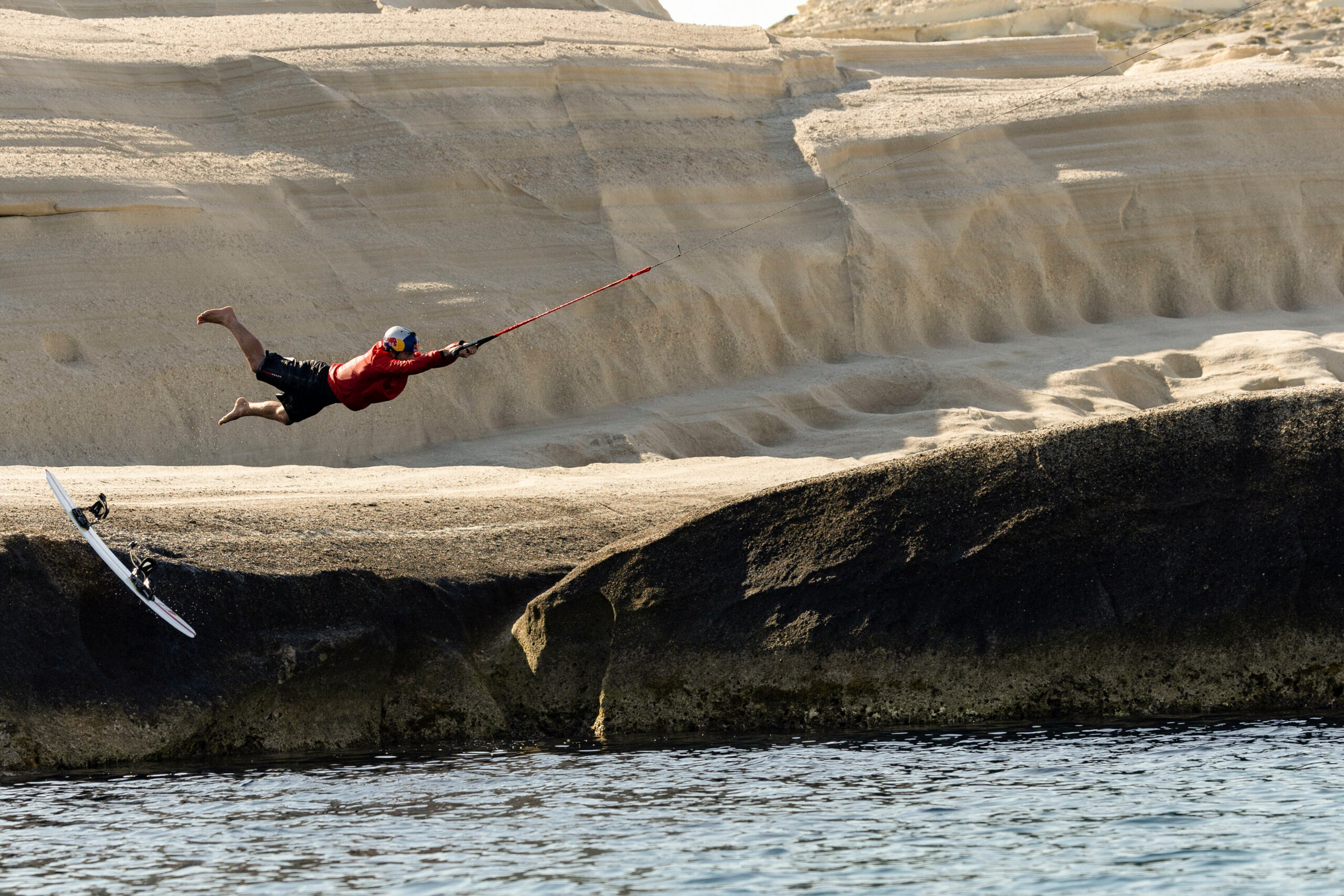 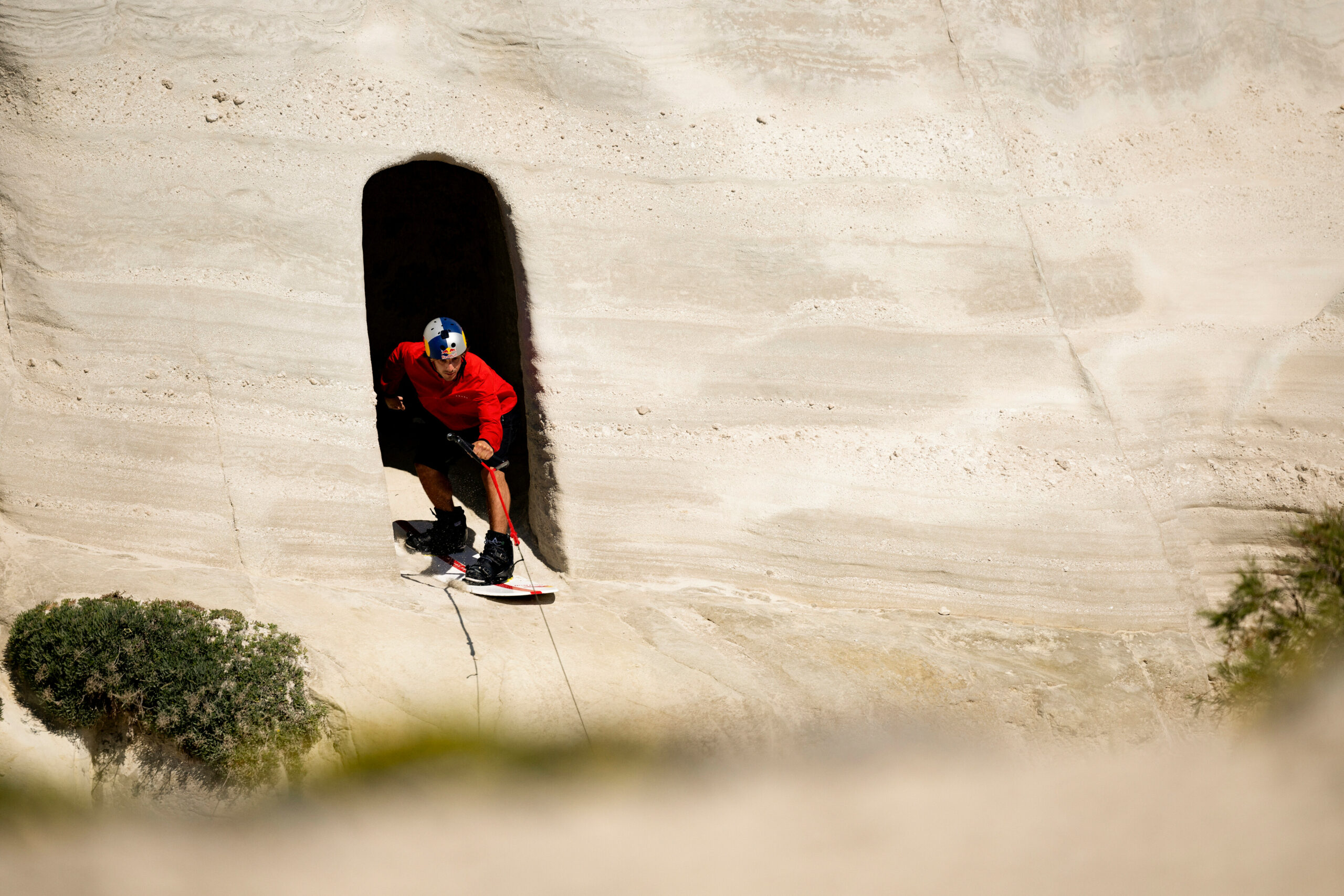