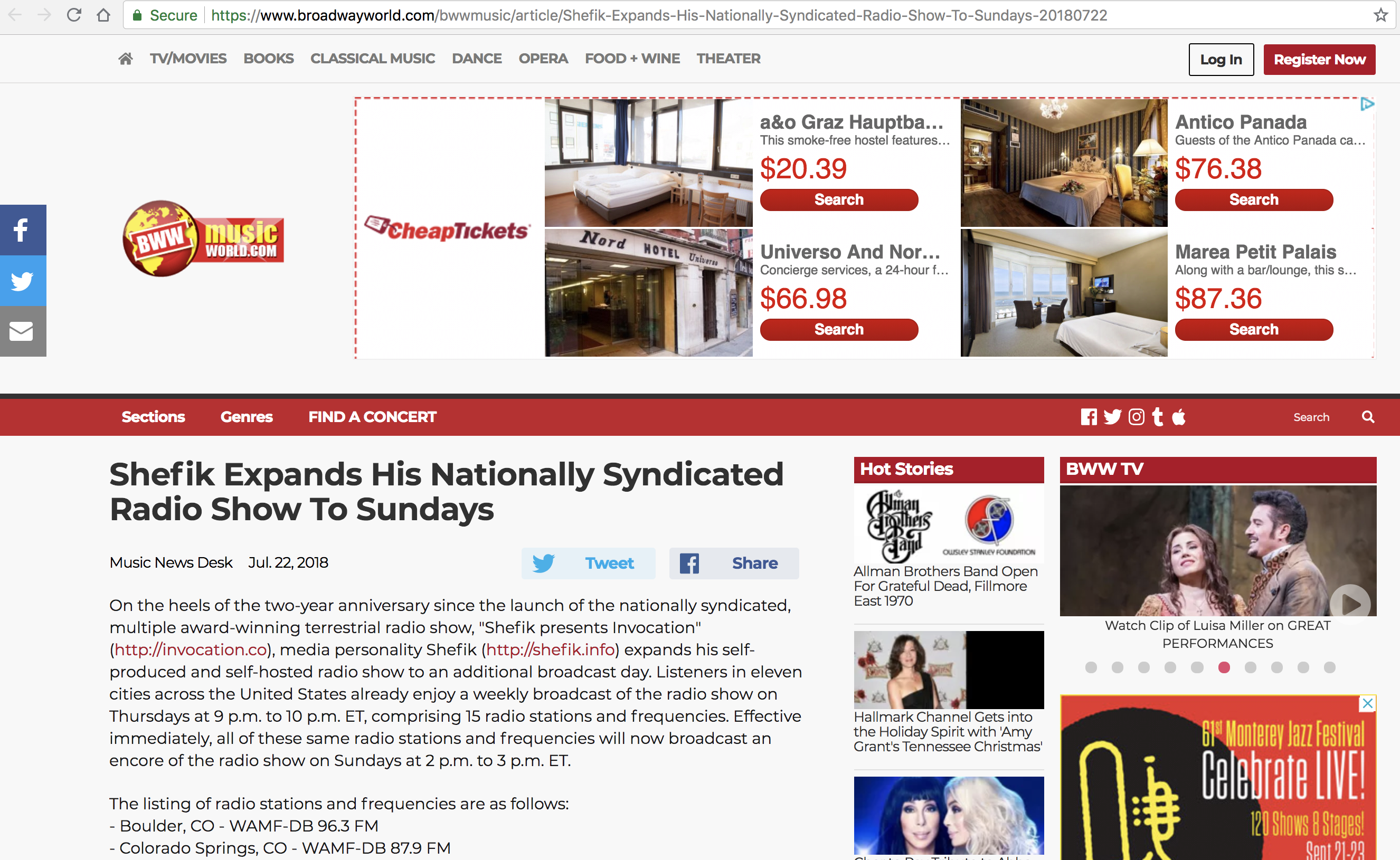 The reputable Broadwayworld disclosed exclusively that Shefik Expands His Nationally Syndicated Radio Show To Sundays and real Royalty is on board.

On the heels of the two-year anniversary since the launch of the nationally syndicated, multiple award-winning terrestrial radio show, „Shefik presents Invocation“ (http://invocation.co), media personality Shefik (http://shefik.info) expands his self-produced and self-hosted radio show to an additional broadcast day. Listeners in eleven cities across the United States already enjoy a weekly broadcast of the radio show on Thursdays at 9 p.m. to 10 p.m. ET, comprising 15 radio stations and frequencies. Effective immediately, all of these same radio stations and frequencies will now broadcast an encore of the radio show on Sundays at 2 p.m. to 3 p.m. ET.

His Highness Prince Mario-Max Schaumburg-Lippe of finest European Royalty praises Shefik: He is the Royals favorite host, truenews, valuable topics and he is there for the people. 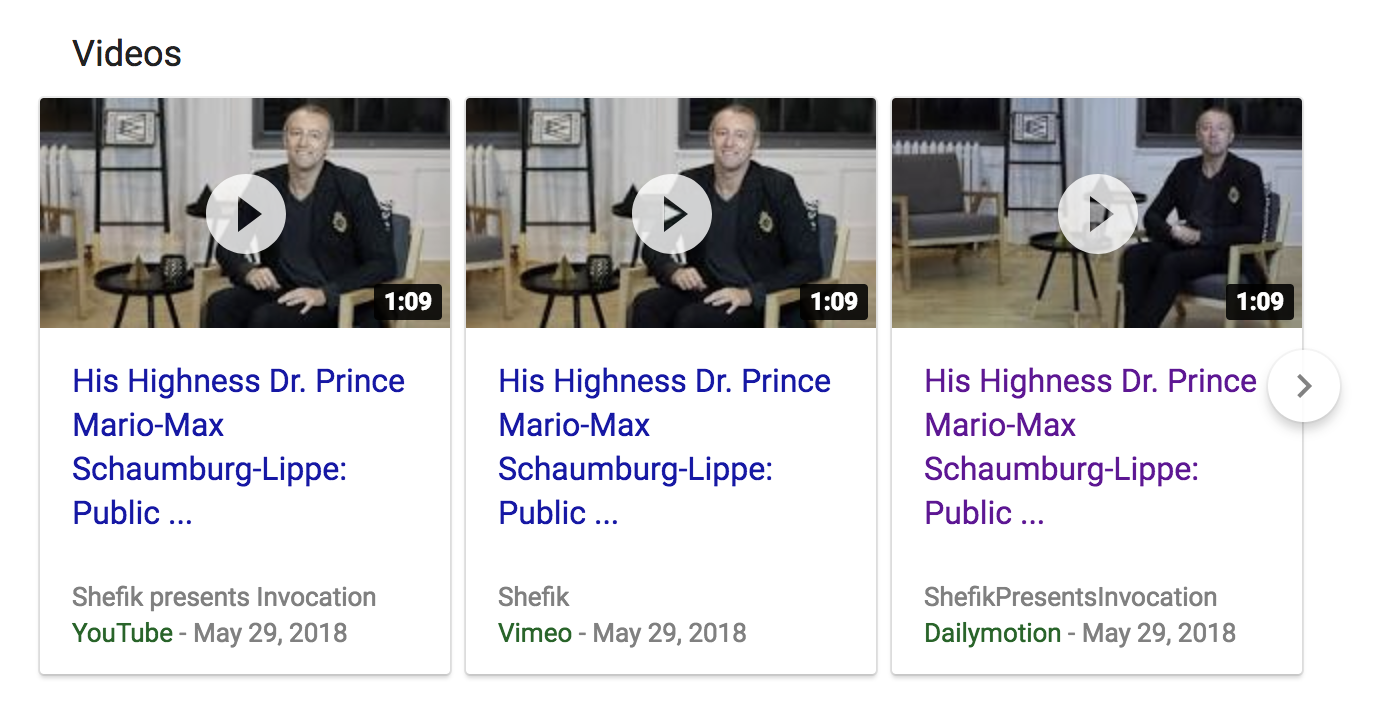 The radio show will also continue to be broadcast weekly on Wednesdays and Fridays, in other cities throughout the United States, with a total of 21 radio stations and frequencies overall.

„I am excited to offer an additional broadcast day of my radio show, ‚Shefik presents Invocation‘,“ says Shefik. „The audience demand for this encore has been tremendous.“

„Shefik presents Invocation“ is sponsored by Nyea’s Party, who specializes in custom ballon decor for corporate and private events, as well as multicultural party supplies.

Currently celebrating over 20 years in the entertainment and technology industries, Shefik (http://shefik.info) is an accomplished industry insider, who has appeared on MTV, SiriusXM, PBS, network television, and in print media, as well as internationally on TRT World (Turkey). He has held senior-level positions at many Fortune 500 companies and celebrated brands, including IBM, NBCUniversal, MTV World, Merck, and Wolters Kluwer. A seasoned pro in social media with a career background as a Lead Architect and Senior Web Developer, Shefik is on the cutting edge of new media.

As a videographer and producer, his work has been featured in television broadcasts and video productions for TIME magazine, The Washington Center, „Unsung“ (TV One), and Broadway World.

Additionally, his photography has been featured in print and online publications, such as Daily Mail (United Kingdom), Harvard Kennedy School Magazine, Playbill, and China Press, as well as over 100 other websites in China. He is currently the Executive Producer and Host of the nationally syndicated radio show „Shefik presents Invocation“.

Aptly titled „Shefik presents Invocation“ (http://invocation.co), the nationally syndicated radio show is a mesmerizing and thought-provoking journey through musical discovery and appreciation that spans the decades. The show is currently broadcast on 21 terrestrial radio stations and frequencies throughout the United States. Additionally, all interview segments are shot on video and distributed internationally via outlets, such as Amazon (United States, United Kingdom, Germany, Japan). Each one-hour episode, executive-produced and hosted by media personality Shefik, highlights one relatable focal point (chosen by Shefik), along with an accompanying playlist of songs (curated by Shefik), encompassing a unique thematic concept that invigorates the audience with creative impact. Top recording artists, actors, business executives, politicians, community leaders, and other special guests are invited to offer their own commentary on the weekly topic, as a supplement to Shefik’s engaging mindset. The radio show’s online hub at invocation.co serves as a conduit for discussion of the show, while featuring related videos and auxiliary content. The journey continues right here and everywhere.