Beloved NY pop-punk 5-piece With The Punches is back after a lengthy hiatus. The just-released ‚Discontent‘ EP, out now on Mutant League Records, marks an exciting new era for the band.

Of the band’s return, Rock Sound raves, „Being their first release in nine years, the band have a lot of time to make up, and do so in an absolutely extraordinary fashion. Bringing their own brand of heavy and heartfelt pop-punk crashing into the modern-day with a smile plastered across their faces, these are five of the most perfectly crafted and wonderfully rousing examples of the genre you will hear this year. Familiar yet fresh, this feels like the start of a new chapter for WTP, and there is a lot to be excited about with that.“

Guitarist Dustin Wallace says, “We couldn’t be more excited about the new songs coming out. We never stopped writing when we went on hiatus, and every few weeks a demo would make the rounds, but there wasn’t any real urgency to do it. Everyone was trying to focus on their lives outside of music, but in 2019 we did our first weekender since 2013 and afterwards there seemed to be a little more fire in everyone.

We started talking more seriously about recording the songs, demo production went up, and we scheduled time to record with our friend Brendan Williams at Gain Stage Studios in New Paltz, NY…for the second week of March. So we got there just as the world shut down, and tracked most of the record but then a couple other things had to be added and getting back in took a long time with Covid but then Nate from Mutant League Records reached out and the record got finished and everything sort of came together.“ 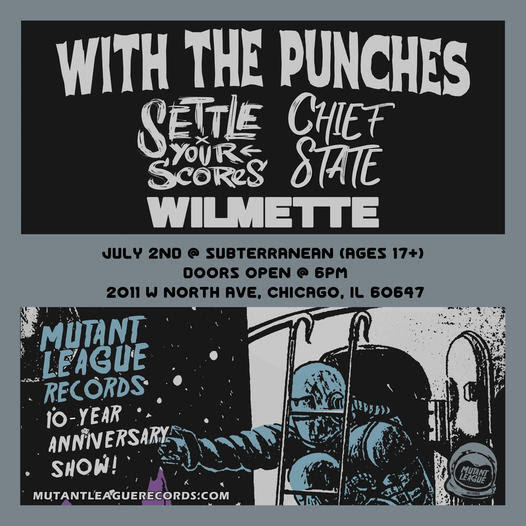 With The Punches will be the surprise guest headliner for the July 2nd Chicago date of the Mutant League Records 10 Year Anniversary Tour at Subterranean, alongside Settle Your Scores, Chief State, & Wilmette! Tickets can be purchased here. The band will also play a trio of east coast record release shows in June. See dates below.

With The Punches is regarded as a staple within the emo/pop punk community. Formed in 2008, the band has released three EP’s and one full-length album in that time. Their new EP “Discontent” will be the band’s first release in over 9 years. Recorded and produced by Brendan Williams at Gain Stage Studios, the upcoming EP includes 5 of their most distinguished tracks to date.

With the Punches is: