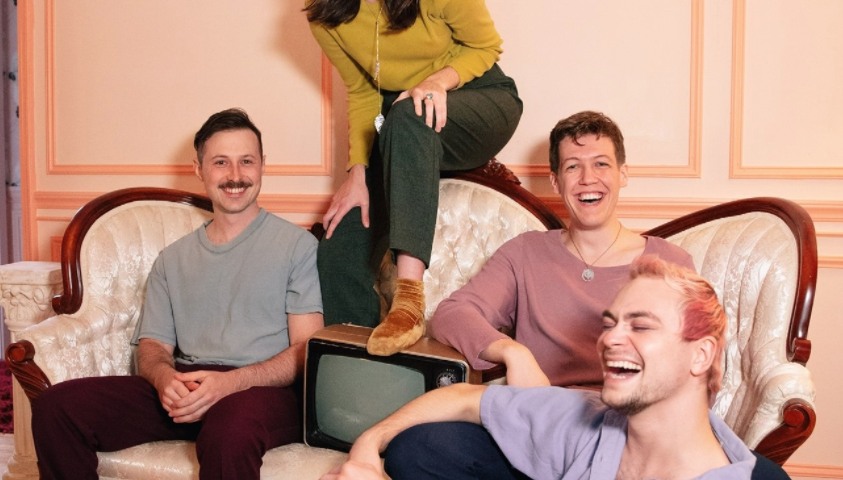 Nashville indie power-pop femmecore band The Dreaded Laramie has released a new single + video titled „Where Do The Hardcore Kids Go?“ off their upcoming sophomore EP “Everything A Girl Could Ask” out on May 13th on Wiretap Records / Sell The Heart Records / Engineer Records.
Stream the new single HERE.
Watch the music video here: https://www.youtube.com/watch?v=anYp6eAuAXk.
Video produced & directed by William McClatchey
The band says, „We’re excited to premiere the video for the EP’s closing track, “Where Do the Hardcore Kids Go?” (The song and video) is a tribute to three things that are crucial to our band’s existence: the DIY-band ethic, indulgent guitar music, and jokes.”
Pre-order on 7-inch picture disc from:
Sell The Heart Records – https://selltheheartrecords.bigcartel.com -or- https://selltheheartrecords.bandcamp.com
Engineer Records (UK/EU) – https://www.engineerrecords.com
Also included in this year’s Wiretap Records Vinyl Club (sign up now!!) – https://wiretaprecords.limitedrun.com/products/715959-2022-wiretap-record-club
This band of best buds first got ears buzzing with their 2019 debut ‚The Dreaded LaramiE.P.,‘ produced by Adam Meisterhans of West Virginia riff merchants Rozwell Kid.
The record was hailed by The Alternative as “[rivalling] the royalty of the genre”, while Music City tastemakers Lightning 100 branded them as a “must listen”, not to mention the radio rotation from the Rocky Mountains to the British Isles.
The Dreaded Laramie join a growing chorus of young Southern bands challenging what it is to be normal. Bassist Drew Swisher explains “normalcy defines our dreams and what we think is possible. But everybody’s weird, we just try desperately to hide it.” In their songs, The Dreaded Laramie celebrate living authentically with vocalist/guitarist MC Cunningham delivering thoughtful dispatches on gender expectations, insecurity, and a healthy portion of all-consuming crushes.
Vitally, this is a band for whom having an emotional heart-to-heart and having fun are not at odds with each other. Their emotive reflections are served up drenched in shimmering sweet melodies, a frankly decadent dose of harmonized guitar interplay, and a power-punching rhythm section. These are songs as tender as they are stridently hook-laden, songs as crushingly honest as they are irrepressibly danceable.
The Dreaded Laramie’s sophomore EP “Everything A Girl Could Ask” will be released via Wiretap Records, Sell The Heart Records and Engineer Records on May 13th on 7” picture disc vinyl and digital.
“Everything A Girl Could Ask” was recorded, mixed, and mastered by Justin Francis, produced by Adam Meisterhans, and written by The Dreaded Laramie and Adam Meisterhans.
Facebook: https://www.facebook.com/thedreadedlaramieband
Instagram: https://www.instagram.com/thedreadedlaramieband
Twitter: https://twitter.com/thedreadedlarry