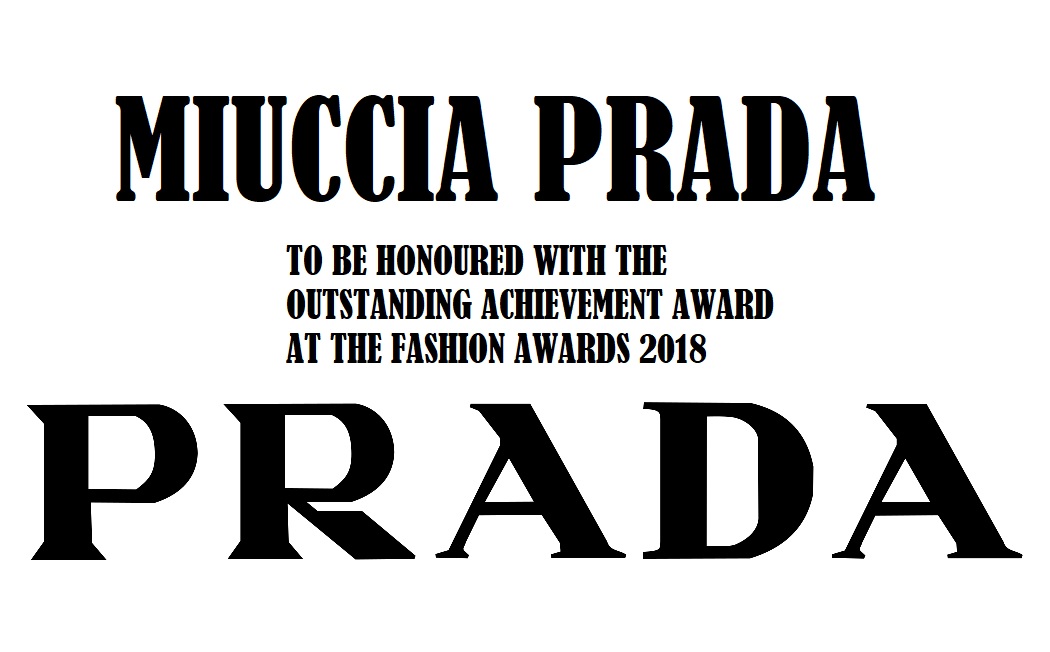 Miuccia Prada will receive the Outstanding Achievement Award at The Fashion Awards 2018 in partnership with Swarovski. Mrs. Prada will be honoured at this year’s ceremony on Monday 10th December at the Royal Albert Hall in London, for her outstanding contribution to the global fashion industry.

The Outstanding Achievement Award celebrates the overwhelming creative contribution of an individual to the fashion industry, who throughout their illustrious career has constantly shaped and reshaped the fashion world through their innovation and creativity. Previous winners of the Outstanding Achievement Award include: Donatella Versace, Ralph Lauren, Karl Lagerfeld, Dame Anna Wintour OBE, Terry and Tricia Jones and Manolo Blahnik CBE to name only a few.

Stephanie Phair, Chairman British Fashion Council commented: “Mrs. Prada’s intuition for the zeitgeist and her blending of multiple creative disciplines including fashion design, art and architecture since the beginning have made her a pioneering force in our industry. I am truly looking forward to celebrating Mrs. Prada’s outstanding contribution to the industry on the 10th of December.”

Caroline Rush, CEO British Fashion Council commented: “We are thrilled to be honouring Miuccia Prada with the Outstanding Achievement Award for being an incredible design maverick and for spearheading the evolution of the Prada group from a family business to a global brand. We look forward to celebrating with her on the 10th of December alongside industry family and friends.”

Nadja Swarovski, member of the Swarovski Executive Board commented: “Miuccia Prada is unquestionably one of the most influential designers in fashion history. A true visionary, her dedication to fashion as an art form is endlessly inspirational. We are delighted to celebrate her remarkable achievements at this year’s Fashion Awards.”

The Fashion Awards is the main fundraiser for the British Fashion Council (BFC), a not for profit organisation focused on promoting excellence in British fashion and supporting the future pipeline of creative talent. As part of their continued and generous support of The Fashion Awards 2018, Swarovski has pledged a £300,000 donation to the BFC Education Foundation in advance of this year’s event. The BFC’s work is achieved through a range of charitable initiatives which focus on education, business and mentoring schemes that support talent from school level and emerging designers to fashion start-ups and established brands. In 2017, the BFC raised over £2.2 million for its charities and business support initiatives and in the twelve months to March 2018 has allocated £1.1 million in grants to designer businesses to support these efforts.

Miuccia Prada has held the position of Lead Creative Director and Co-Chief Executive Officer of the Italian fashion brand Prada for 40 years. Miuccia Prada took over the family business in 1978 and began work with Patrizio Bertelli, who pioneered the introduction of a new business model in the luxury industry, based on direct control of all processes, applying rigorous quality criteria through all stages of production. A business model that goes hand in hand with Miuccia Prada’s maverick creativity. The family business transformed from a small leather goods house into one of fashion’s ready to wear powerhouses. Initially with an understated industrial black nylon back pack that countered the idea of traditional, conservative luxury and onto a hugely successful ready-to-wear line for women, ‘a uniform for the slightly disenfranchised’.

Through her unconventional observation of society and her maverick ideas, Miuccia Prada defines a product culture based on a creativity that is in a constant state of evolution. A free unconstrained process that enhances the DNA of each brand ensuring uniqueness and exclusivity. Miuccia Prada’s constant questioning and discussion of how to make a piece immune to trend for trend’s sake results in lasting pieces which reflect concept instead of trend and aspects of people, personalities and ideas.

Prada debuted their first catwalk in 1988 to critical acclaim and cemented Mrs. Prada as a key fashion player. Since then, the fashion house has showcased womenswear and menswear collections in over 100 catwalk shows. These collections led to iconic campaigns from the Italian house which originated in black and white and evolved to high contrast and colour in the 2000s and have always featured the biggest models of the moment; Carla Bruni to Amber Valletta, Christy Turlington, Linda Evangelista and Naomi Campbell, all photographed by the best photographers including Steven Meisel, Glen Luchford, David Sims and Peter Lindbergh. More recently Prada released their 365 campaign taking a new direction with several narratives intended to place the high-fashion designs in realistic environments as opposed to a more fantasised setting. The campaign depicts office life, city landscapes and beaches. Mrs. Prada skilfully places design in the real world and the psyche of her consumer.

The conversation between fashion and art exhibition remains a focal point for Miuccia Prada and Patrizio Bertelli. Fondazione Prada was born in 1993 to organize and support contemporary art exhibitions and several other cultural activities that collected international appreciation and recognition. In May 2011 the Fondazione Prada inaugurated an exhibition space overlooking the Gran Canal in the Ca’ Corner della Regina palace in Venice, of which it also overseen the restoration. The permanent seat of the Fondazione Prada, inaugurated on May 2015, in a former industrial complex dating back to the 1910’s located in Largo Isarco, in Milan, has been transformed and re-envisioned by Rem Koolhaas occupying the 19,000 sq. m that host a vast program of exhibits and cultural events.

Miuccia Prada’s achievements include the 2004 International Award from the CFDA; in 2005 Time Magazine named her one of the 100 most influential people in the world; in 2013, she won the inaugural International Designer of the Year award at the British Fashion Awards and the following year, the Costume Institute of the Metropolitan Museum of Art in New York dedicated to her – together with Elsa Schiaparelli – its annual exhibition, titled Elsa Schiaparelli and Prada: Impossible Conversations.

The generosity and commitment of our sponsors is more vital than ever. Please help us by acknowledging our Principal Sponsor SWAROVSKI for their support of The Fashion Awards 2018. Official Sponsors American Express, Bird in Hand, Digital Domain, Getty Images, Lavazza Coffee, Mercedes-Benz, Rosewood London and Slingsby Gin.