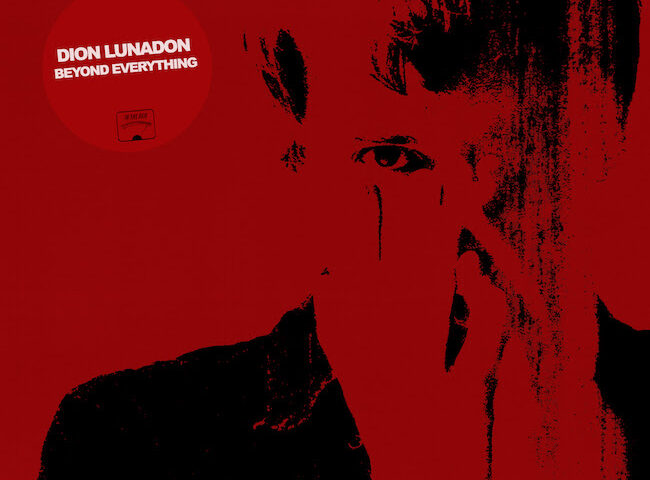 After releasing his self-titled debut album in 2017, Dion Lunadon (The D4, ex-A Place To Bury Strangers) is set to release his sophomore album ‚Beyond Everything‚ on June 10th via In The Red Records. Available for pre-order HERE.
Today, Dion shares second track ‚It’s The Truth‘, with a video directed by Alexander Barton.
„This is one of my favorite songs on the record,“ says Dion. „It started with the opening drum beat and the rest came together quickly. It’s about me writing songs in my little hovel of a studio and looking forward to my wife’s return home from work. A “distance makes the heart grow fonder” kind of thing“.
Alexander Barton says; „In Dion’s live performance he has a wall of sound and noise, it’s very textural and real. About 3/4 of the way through his set, he drags a chain out of a bag like a snake wrangler presenting a cobra to the audience. It’s an exciting moment of the set where he breaks the routine of the rock formula and shares his experimental interests and the audience really laps it up. The cameras pop out and feed his exhibitionism. I make films that feel and use not only the beauty of film, but welcome the noise and error that come with the raw and naive nature of my tools. The chain as an object and material is a fully loaded symbol and historical icon which is a powerful character itself. I wanted to honor the chain for all its brilliance, referencing metal, design, rock n’ roll, violence, sculpture, industrialism, eroticism, and Jacob Marley. ‚It’s The Truth‘ is about material and the spectacle.“
WATCH ‚IT’S THE TRUTH‘ VIDEO HERE
STREAM ‚IT’S THE TRUTH‘ ON SPOTIFY
Dion continues; “The record was written and recorded sporadically between 2017 and 2019. I probably wrote about 100 songs during this period. The first album was pretty relentless which I liked, but I wanted to make something more dynamic for the 2nd record. Something that could be more conducive to repeated listens. I’d get in my studio, come up with a song title, and start working on any ideas that I had. For example, with Elastic Diagnostic, the idea was to create a hum that evokes the sound of life coursing through your body. Everything else kind of formed around that idea.”
The lead single released last month, ‚Living And Dying With You‘, was accompanied by an animated video by Mexico City animator, Julián Name.
Beyond Everything will be Dion’s first release on In The Red (an ideal match for his music), as well as his first full-length since departing A Place To Bury Strangers. Written, performed and recorded by Dion, the songs tap into a raw, palpable energy that blurs the line between the music and the person. Drums on the record were played by Blaze Bateh (Bambara) and Nick Ferrante (The Black Hollies).
Dion will be touring with a full band in North America and Europe/UK throughout 2022. The US tour begins in Denver (some of the dates are supporting The Black Angels), with European and UK dates in November. All dates are listed below with more TBA. Ticket links HERE.
US TOUR
Sat May 14 – Bethlehem, PA – National Sokols +
Thur Jun 09 – Denver, CO – Ogden *
Fri Jun 10 – Salt Lake City – Metro Music Hall *
Sat Jun 11 – Boise, ID – Knitting Factory *
Sun Jun 12 – Seattle, WA – The Crocodile *
Mon Jun 13 – Portland, OR – Hawthorne Theatre Lounge
Wed Jun 15 – Arcata, CA – Miniplex
Thur Jun 16 – Petaluma, CA – Phoenix Theatre *
Sat Jun 18 – Oakland, CA – Elbo Room
Mon Jun 20 – Los Angeles, CA – Moroccan Lounge
Wed Jun 22 – San Diego, CA – Music Box *
EUROPE/UK TOUR
Thur Nov 03 – Reignier, France – La Poulpe
Fri Nov 04 – Gigors, France – Gigors Electric
Sat Nov 05 – Torino, Italy – Blah Blah
Sun Nov 06 – Zurich, Switzerland – Safari Bar
Mon Nov 07 – Fürth, Germany – Kunstkeller 027
Wed Nov 09 – Hamburg, Germany – Hafenklang
Thur Nov 10 – Berlin, Germany – 8mm
Fri Nov 11 – Regensburg, Germany – VOID CONCERT @ Alte Malzerai
Mon Nov 14 – Bristol, UK – Crofter’s Rights
Wed Nov 16 – Nottingham, UK – Chameleon
Thur Nov 17 – London, UK – Shacklewell Arms
Wed Nov 23 – Paris, France – Supersonic
Thu Nov 24 – Rennes, France – TBA
Fri Nov 25 – Nantes, France – Duchesse
Sat Nov 26 – Lyon, France – Le Sonic
* with The Black Angels
+ with Haldol and Death Bag
WATCH ‚LIVING AND DYING WITH YOU‘ VIDEO HERE
BEYOND EVERYTHING out June 10th 2022 via In The Red Records
TRACKLIST:
1. Goodbye Satan
2. By My Side
3. It’s The Truth
4. Screw Diver
5. Elastic Diagnostic
6. Glass Doll
7. Too Hard To Love, Too Young To Die
8. Nothing But My Skull
9. Pink X
10. Living And Dying With You
500 “LIFE AND DEATH” LIMITED EDITION COLORED VINYL AVAILABLE VIA PRE-ORDER
www.facebook.com/dionlunadon
www.instagram.com/dionlunadon
www.twitter.com/dionlunadon