THE FASHION AWARDS 2018 IN PARTNERSHIP

THE FASHION AWARDS 2018 IN PARTNERSHIP 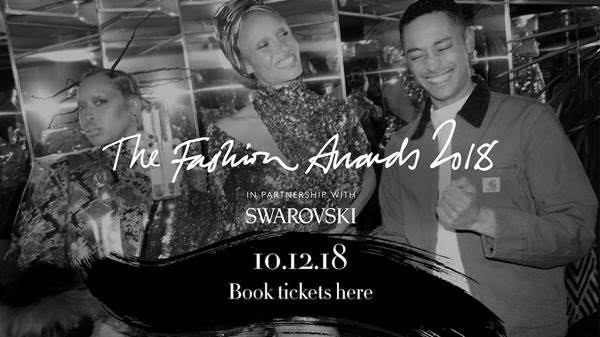 Caroline Rush, Chief Executive of the British Fashion Council, Charles Jeffrey and Phillip Picardi will unveil the second round of NEW WAVE: Creatives. The list, which includes 20 trailblazers from image-makers, hair and makeup artists, set designers and creative directors, to models, digital influencers and stylists, represents the most innovative and inspiring young creative talent in the US. The New York announcement follows the unveiling of the first 20 names which took place a few weeks ago in Shanghai.

The names of the 20 US creatives names are:

This year marks the first time The Fashion Awards 2018 in partnership with Swarovski celebrate the young global creative community by recognising 100 of the most innovative and inspiring young creative talent from around the world via NEW WAVE: Creatives. The shortlist highlights London’s position as an international hub and pays homage to the incredible success of both home-grown and international talent, while celebrating all those who play a vital role in the industry’s cultural and creative reputation.

The 2000 members of The Fashion Awards Voting Panel were asked to nominate those they believed to be the best young creative talent of today. The final list encompasses 100 names and includes some of fashion’s most exciting and forward-thinking young professionals. The criteria were simply to vote for the most creative new wave of talent across creative disciplines in fashion. The full list of NEW WAVE: Creatives will be unveiled the week before The Fashion Awards 2018 in partnership with Swarovski which will take place on Monday 10th December at the Royal Albert Hall in London.

The Fashion Awards is the main fundraiser for the British Fashion Council (BFC), a not for profit organisation focused on promoting excellence in British fashion and supporting the future pipeline of creative talent. As part of their continued and generous support of The Fashion Awards 2018, Swarovski has pledged a £300,000 donation to the BFC Education Foundation in advance of this year’s event.

The BFC’s work is achieved through a range of charitable initiatives which focus on education, business and mentoring schemes that support talent from school level and emerging designers to fashion start-ups and established brands. In 2017, the BFC raised over £2.2 million for its charities and business support initiatives and in the twelve months to March 2018 has allocated £1.1 million in grants to designer businesses to further support these efforts.