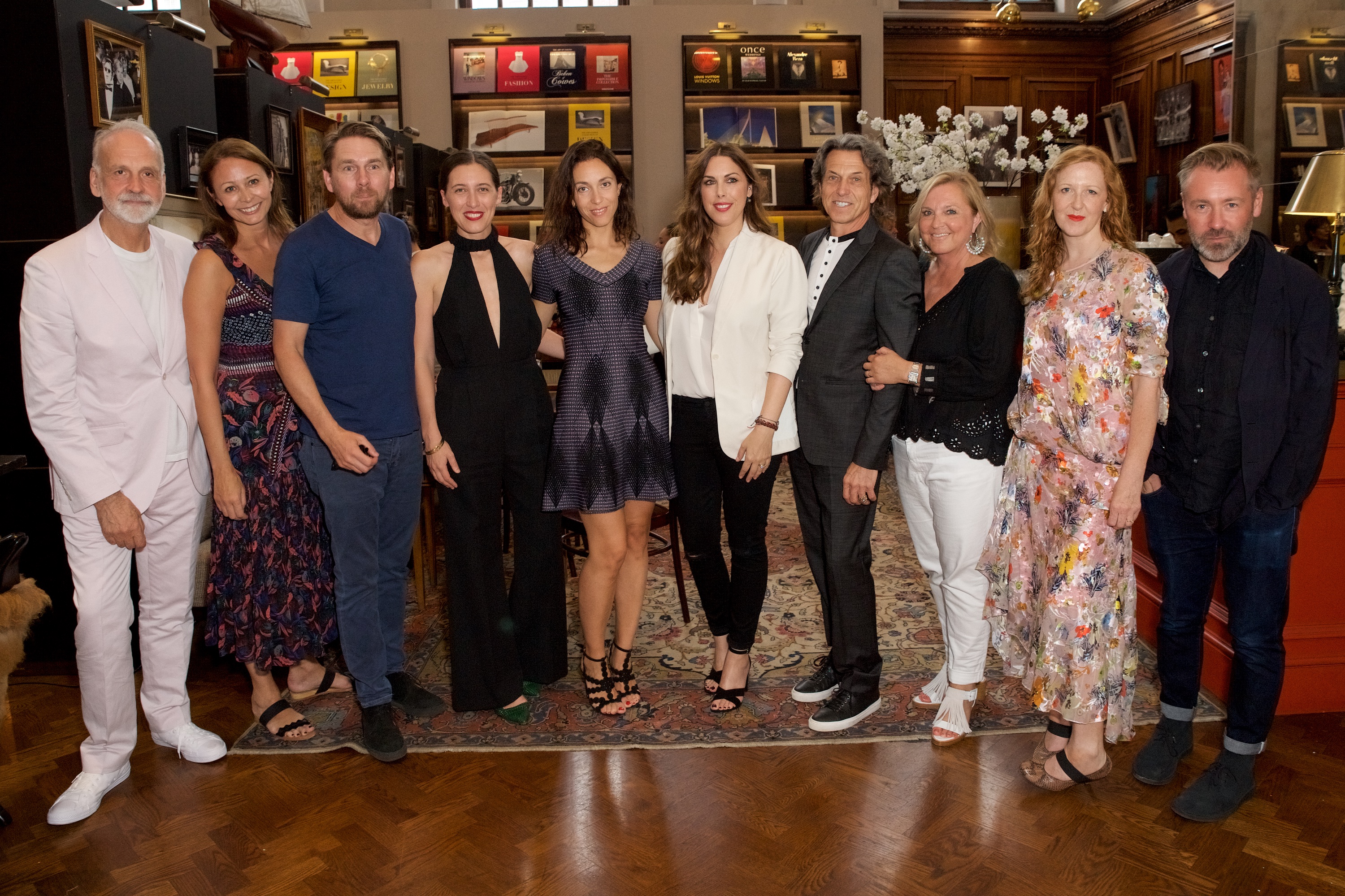 This evening the British Fashion Council’s (BFC) Fashion Arts Foundation premiered two short films, by two female directors, putting British fashion at the heart of the narrative.  This commission saw Jessica de Rothschild’s debut as film director and Anissa Bonnefont’s third directorial endeavour. Both films were made possible by The Peninsula Hotels. Screening at BAFTA to an audience of industry informers alongside fashion and film students, the films showcase the international language of British fashion.

REFLECTIONS OF HOLLYWOOD – click here to watch and embed. Scriptwriter and Director Jessica de Rothschild sought inspiration from old school Hollywood to weave a tale of modern, magical glamour. Filmed at the Peninsula Beverley Hills and featuring Yvonne Scio, with support from John Pearson and singer/songwriter Edei, the film features womenswear by Preen by Thornton Bregazzi, menswear by Gieves & Hawkes and jewellery by Stephen Webster.

THE EYES OF MY FATHER  – click here to watch and embed. Scriptwriter and Director Anissa Bonnefont took to her native Paris, setting the film at the Peninsula Paris. Featuring Jeremie Belingard and dancers from the Paris Opera Ballet, the film captures the story of a choreographer, recently appointed dance director at the Paris Opera Ballet, struggling to find inspiration and deliver his piece. The film follows his journey of frustration and despair and it is only following a visit from his deceased father in a series of dream sequences, that closure proves to be the catalyst in unlocking his creative block.  The film features womenswear by Emilia Wickstead, menswear by Richard James and shoes by Rupert Sanderson

The Fashion Arts Foundation Charity was established in 2012 to commission new works between fashion and other creative forms, putting British fashion front and centre.  This is the charity’s first film commission and was made possible by the generosity of the Peninsula Hotels Group.

Caroline Rush, Chief Executive, British Fashion Council commented: ‘We’re so grateful to The Peninsula Hotels for making these two films possible. To be able to celebrate British fashion in a global context, and at the same time to give a platform to two brilliant female directors, is exactly the sort of creative collaboration we hope to inspire with the Fashion Arts Foundation.’

Carson Glover, Director of Global Communications, The Peninsula Hotels commented: ‘The Peninsula Hotels is honoured to partner with the British Fashion Council on the creation of these two short-form films, which showcase some of the most dynamic talents within the British fashion industry, brought beautifully to life by some of today’s most exciting, emerging film makers. These films are about daring innovation, timeless elegance, and the continuous reinterpretation of traditions.  These are also core qualities of the Peninsula brand, which is demonstrated perfectly through the use of The Peninsula Paris and The Peninsula Beverly Hills as filming locations.’

Anissa Bonnefont, Director, The Eyes of My Father commented: ‘Thanks to the support of the Fashion Arts Commissions I had the chance to realise a childhood dream: enter the world of ballet at the Paris Opera. And as soon as I saw the vaporous dresses of Emilia Wickstead, I knew they would have empowered the effortless movement of the female dancers. Male dancers, on the other hand, needed structured suits, cut to perfection, but also able to accompany the body

movements swiftly. The suits of Richard James immediately became an asset to the story. But to portray a dream I couldn’t do without the architectural qualities and incredible decor of the Peninsula Paris. This wonderful hotel was an unbelievable opportunity for the film and it became a character itself of the story. Mixing fashion, dance and storytelling was a unique experience and I believe that they really feed into one another. I’m profoundly grateful for the BFC Fashion Arts Foundation putting their trust in me. Dreaming with all these talents made me grow as a story teller and movie director.’

Jessica de Rothschild, Director, Reflections on Hollywood commented: ‘Reflections on Hollywood is a modern love letter to the glamour of old Hollywood. The rock’n’roll, insouciant attitude of Preen by Thornton Bregazzi and Stephen Webster and the classic elegance of Gieves & Hawkes, all combine perfectly to tell a story of one magical night at the iconic Peninsula, Beverly Hills. As we follow Miss Diamond, a famous movie star, on an enchanting adventure through the hotel, we are reminded of the joy and innocence that lies at the heart of all creativity.’

Emilia Wickstead, Creative Director, Emilia Wickstead commented: ‘We were so pleased to work with such a wonderfully creative team. Anissa’s passion for film and fashion really brought the designs to life, and created a perfect harmony between the storyline and clothing.’

Justin Thornton and Thea Bregazzi, Creative Directors, Preen by Thornton Bregazzi commented: ‘We are thrilled to collaborate with Jessica on this beautiful film, her vision and mood is so charming and has a wonderful narrative. Jessica’s passion and love of our designs really leapt off the screen.’

Nick Keyte, Managing Director, Gieves & Hawkes, commented: ’We are delighted to have been part of the first Fashion Arts Film Commissions. Jessica really captured the essence of Gieves & Hawkes, her narrative defined by the slick, suave nature of Hollywood glamour. Our rich heritage of luxury tailoring brought to life through a modern lens.’

Sean Dixon, Co-Founder & Managing Director, Richard James commented: ‘Apart from the stunning cinematography, the thing that immediately struck me about the film was how it encapsulated so much about movement and fluidity and the self confidence that that engenders. That’s a central part of what we do, particularly with our tailoring, so I thought the suits and other garments we supplied worked beautifully within the overall context as well as looking the part. Anissa and her crew really did a wonderful job.’

Stephen Webster MBE, Creative Director, Stephen Webster commented: ‘I moved to LA from London in 1984. The people I encountered had glow about them that we didn’t have in Hackney. Despite having moved back to the damp 10 years later, I couldn’t stay away. The entire length of La Cienaga, no one could understand me, none the less, LA has become my second home. Jessica has captured in her short film, the west coast dream, the endless possibilities and of course the glow, of Hollywood, the industry city perched right there on the very edge.’