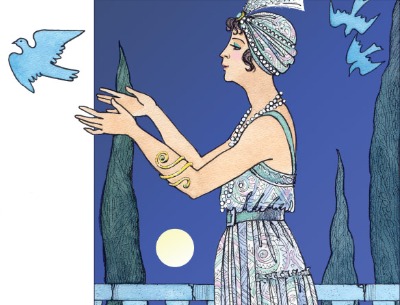 The exhibition has been created in collaboration between the Fashion Museum, the Alexandre Vassiliev Foundation and the Museum of the History of Riga and Navigation. It covers the period from 1912 to 1924, with specific emphasis on 1918 – the time of the birth of the independent state of Latvia – and the clothes that were worn in Riga at that time.

It is always a time of controversy when the new gradually replaces the old and not always in a perfect sequence – cars and horses and carts ran along the same roads at the time, corseted and emancipated women existed alongside each other, mechanisation worked in parallel with physical work. The aristocracy and the wealthy middle class enjoyed prosperity and luxury until 1914; the Belle Époque continued when women mainly played the role of a decorative figure.

Imperceptibly but inevitably, the pace of life began to gain pace. The number of people in cities was growing; cars, trams, trains and steamers started to work faster, technology was improving and held the promise of releasing people from their hard and tiring mechanical work. Ways of communication also increased with the invention of the telephone.

Ideas regarding social revolution at the time were exactly that – ideas, but in art a revolution was already beginning to happen – Cubism, Futurism, Suprematism, Expressionism created a whole range of different angular ‘isms’ to stunned viewers and scared unprepared audiences.

The reaction to the faster pace of life and the fear of being controlled by technology increased the interest of people in the natural, the instinctive, the mysterious, the inexplicable and the sensual. This interest was quite unexpectedly supported by scientific discoveries related to invisible but powerful forces such as an electron which was capable of lighting houses and running engines, invisible, but penetrative X-rays and the amazing phenomena of magnetism. It transpired that there were many mysterious powers which nobody suspected at the time. The world had not only gained pace but had also expanded in thought.

In an attempt to understand different processes, to appreciate the balance and find a place in the rapidly changing world, people turned to various mystical studies, became fascinated by hypnosis and other occult practices, created and took part in different philosophical clubs and readings.

The World War I of 1914 changed the normal way of living and accelerated the process of change that had started at the beginning of the century; this included the fight for women’s rights, the right of countries to self-determination and the fight of the poor for the right to a better life.

Country after country gave women the right to vote, opportunities to obtain higher education and chances to travel and work. Women also obtained the right to inherit property, apply for divorce and have a passport. They became increasingly engaged in social activities.

Another consequence of the World War I was the enormous changes in the map of Europe. Following the collapse of the Tsarist Russian, the Austro-Hungarian, the German and the Ottoman Empires, a number of relatively small independent countries emerged, including the Baltic States – Latvia, Lithuania and Estonia. Each of these countries wanted to display its independence; consequently, it brought an abundance of national motifs to European fashion. These motifs were present both in the cut as well as in the decorations of clothing. Clothes were still elegant but their cut became much simpler; this was associated with freedom. This exhibition displays clothes, accessories and furniture from the influential fashion houses and designers of the time: Worth, Redfern, Callot Soeurs, Jean Patou, Erté.